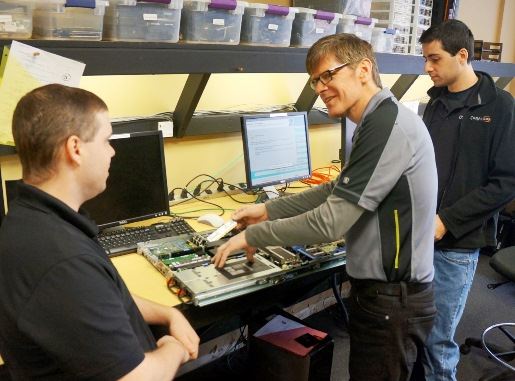 Most of the larger clients of CompuGIG - a family-owned computer service business operating out of Piazza Plaza on Route 19 - already have one or more IT people on staff. And that’s just fine with Ken Kucel, the company’s founder, because not all IT people have the same skills or experience in working with advanced computer networks and servers.

“In the 50 to 200 user range, an organization can afford an IT administrator, but they can’t afford an engineer-level person. The majority of us here are at the Engineer level,” Kucel points out.

He uses a medical metaphor to illustrate the difference, citing a statewide client with multiple locations as an example. “They probably have 20 IT people, yet they retain our services on a monthly basis,” he explained. “They can replace their own band aids, set a broken arm, and do things like that. But when it comes to deep surgery, where you are in there with a scalpel doing stuff that could impact all 700 people at one time, that’s what we do day in and day out. We are really the experts in high-level technical solutions.”

On a monitor in his office, Kucel pulls up a screen showing a diagram with boxes and lists, each representing a customer and that customer’s equipment configuration. “We can remote into any of the facilities we need to get into,” he tells a visitor. “We have VPN tunnels into different organizations right from here. Each one of these little items is a server that we deal with on a week-in, week-out basis. We also have smaller organizations where they just have one server; we handle that right from here, too. So we don’t have to drive out there and waste time getting to the location. We can address it right here, right now.”

In 2001, after being laid off from FORE Systems/Marconi, Kucel started CompuGIG in the Beaver county home he shared with his wife Libbie and their five sons. By that time, his career had also included work with Buchanan Ingersoll, Westinghouse, and AT&T. Prior to that Kucel - who had become fascinated with computers in the late ‘80s - returned to college at a non-traditional age to prepare himself for the digital future he could clearly see coming. CompuGIG was the culmination of that future.

Today, with their growing company operating out of newly acquired space in Piazza Plaza, Kucel, his wife, their oldest son James and five company employees, not only service large clients remotely, they also operate a robust retail-level business, serving smaller enterprises as well as private individuals. Word-of-mouth accounts from satisfied customers, as well as a 30-second Armstrong cable TV spot, have helped to build that side of the business. But it requires more than technical know-how.

“There’s this thing - geeks, nerds, and all that kind of stuff - that goes with my industry,” Kucel admits. “I’ve been trying to get rid of that. At CompuGIG we’re cool guys. We show people how to do different things that are fun.” It’s actually more a people business than a technical one.

“We fix people’s problems - one human being to another. For us, the medium is a computer. We make sure they are comfortable with the solution and that it works for them.

“I’m a big music fan. I know a lot about music and I love music, so this is our gig. This is what we do, except that it’s computers.”