Can you name the biggest maker of nuclear power products in Cranberry? If you said Westinghouse, guess again.

It’s actually Areva, a $9 billion company, with U.S. headquarters in Charlotte, North Carolina, which provides end-to-end materials, equipment, and services to nuclear power plants all over the world. And for the past 10 years, a piece of it has taken up residence in Cranberry Business Park, where it reaches out to serve a cluster of nuclear plants in the U.S. and Canada with electrical equipment and related services.

"This organization exists to supply electrical equipment to nuclear plants. Obsolescence is a huge opportunity."


Although Areva’s worldwide operations employ more than 47,000, even in the United States, which represents only a fraction of its business portfolio, the company employs 5,000. Their specialties range all the way from mining and enriching uranium, to building and servicing power plants, and finally to dismantling old plants and recycling spent fuel rods. But while its capabilities cover the full spectrum, most of its business in the U.S. at this time involves servicing the 104 nuclear power plants already in operation - plants which currently supply 20% of the nation’s electric power. 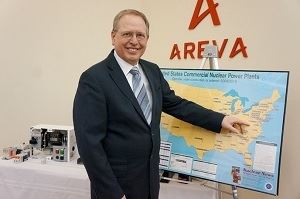 
William Duffett, an electrical engineer, directs the Cranberry operation, where anywhere from 60 to 80 of the company’s employees hang their hats when they’re not out servicing a customer’s site.


William Duffett, who heads the electrical systems operation of Areva in Cranberry, services scores of utility customers in the US. Areva is the world's largest supplier of fuel, equipment and services to the 500 nuclear powered electric generating plants which are either currently in operation or under construction around the globe.

Anything electric “Anything electric that needs to be replaced from an obsolescence standpoint, or is being changed out to increase productivity or efficiency in the plant - that’s what we do,” he said.

“The team is responsible for anything that goes on electrically inside a plant,” Duffett explains. “This organization exists to supply electrical equipment to nuclear plants. And the reason nuclear plants need the equipment is that most of them were built in the ‘70s and ‘80s. So obsolescence is a huge opportunity for us. They’re trying to get more power from the physical equipment in the plants, and technology changes a lot in 40 or 50 years.”


Some if the items the company installs at customer sites are actually very small - electrical relays, starters, and so forth. But some of them, like variable frequency drives which control the motors driving huge pumps, can be the size of a railroad car.


But nuclear power is a peculiar business. While it is clean, stable, and generally quite safe, insulating power plants against real or potential threats - terrorist attacks, cyber attacks, and seismic events, for example - all have a powerful influence on the industry and what it demands from its suppliers, including Areva. “We’re all about safety and quality, because it’s our business,” he pointed out. “We design, build and service nuclear plants with the goal of making them the safest and most efficient form of energy in the world today.”


While most of what the company installs at customer plants involves big, engineered-to-order items, much of it is actually manufactured by a network of independent suppliers - many of which are also based in southwestern Pennsylvania. In fact, before coming over to Areva, Duffett himself had worked for a division of Eaton located in Thorn Hill Park - a business unit subsequently acquired by predecessor of Areva.

Their company’s acquisition meant the former Eaton employees got to keep essentially the same commute as before. That’s more than just a casual convenience. Recruiting and retaining qualified personnel confers an important competitive advantage on technology companies, and the talent pool residing in the greater Pittsburgh area was one of Areva’s top reasons for selecting Cranberry as its home.


“Cranberry’s a very new area, the infrastructure is very attractive for us, there are lots of things to do,” he reflected. “And we’re a very internationally engaged organization. Our international suppliers and stakeholders like coming to Pittsburgh and Cranberry. It’s very convenient. It’s very accessible, and it’s very well located for most of our suppliers.”
Twp  Home
Government Websites by CivicPlus®
SERVICES
PUBLIC SAFETY
PARKS & REC
GOLF COURSE
LIBRARY
BUSINESS
[]