About ten years ago, when the wheels fell off the financial industry and venerable BNY-Mellon Financial was forced to retrench, Cranberry resident Richard Arrington was a senior level executive at the bank with responsibility for a variety of critical operations throughout Europe, Asia and the Americas.  At the same time, however, he had harbored a secret wish: to become the head of his own business.  As a result, Mellon’s misfortune became Arrington’s opportunity.

Using the due diligence he had practiced at Mellon, Arrington evaluated approximately 50 different businesses opportunities, ultimately settling on SpeedPro Imaging, a large-scale graphics printing franchise whose eye-popping work gives trade shows, store windows, vehicle wraps, and other venues a striking visual impact.  In an age where electronic displays have largely displaced paper, theirs is the only segment of the printing industry still growing. 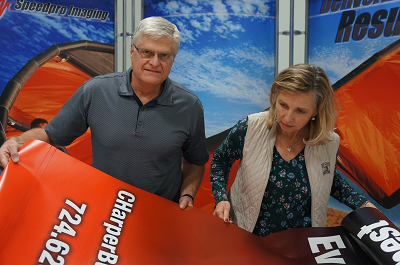 A family affair Lynne Arrington, whose career as a CPA had been placed on hold while she focused on raising the couple’s four daughters, saw the franchise as a way to ease herself back into the workforce.  So she joined her husband with the mutual understanding that if it didn’t work out for her, she wouldn’t have to remain involved.  But it turned out to be an exceptionally good fit.
In addition to the bookkeeping, Lynne handles payroll, HR, customer relations and other aspects of SpeedPro’s day-to-day operations.  Richard focuses more on the strategic aspects of the business including investments, technology choices and expansion.  But the two confer on all of the company’s key decisions.
Living and working in Cranberry allows the luxury of a very short commute for the couple.  But there was more to their choice of locations than personal convenience.  “It’s a great business environment here in Cranberry,” Richard explained.  “There are great companies here and we work with a lot of them.  It’s a very supportive business environment.  I cannot say enough good about the Township management, the Township Supervisors, and the Township Manager Jerry Andree.”

The Arrington’s SpeedPro studio is situated in a flex-space building on Commerce Park Drive, a private road behind the Township Municipal Center.  “The Samson Morris Group in Monroeville own the buildings in this park,” Richard pointed out.  “We have a good landlord.  They’ve been very responsive to our needs.  Although real estate in Cranberry Township is more expensive than in other communities, it’s been good for us.  We’re glad to be here.”