You’re not allowed to sell, or even to give away, prescription medicines you no longer need.  It’s illegal.  They have to be put in the trash.  But there’s an important exception: prescription eyeglasses.  You are free to donate them to organizations, like Lions Clubs, for use by someone else, and you can do it without violating anybody’s laws.

Over the past 18 years, Mission Vision, a Cranberry-based nonprofit that shares office space on Brandt Drive with its founder, ophthalmologist William Christie, has impacted thousands of lives by screening needy patients and distributing donated eyeglasses, sunglasses and reading glasses to people in some of the world’s poorest and most troubled locations.  Its international missions read like the itinerary of a danger-loving adventurer: Haiti, Kenya, Nigeria, Guatemala, Syria, Uganda and Zimbabwe are among the 13 countries visited in 2016 alone.  Just last month, they went to Malawi.

Typically working with a partner church or agency in the host country, volunteers from Mission Vision and affiliated organizations set up temporary clinics in places often marked by illiteracy, lack of electricity and the heavy influence of local witch doctors.  Using town criers and giveaways like balloons to attract people, the agency’s clinics frequently draw thousands.  But many of its stops are also marked by rough justice for anyone deemed to pose a threat.  Stonings, stabbings and other fatal encounters have abruptly ended several previous church missions. 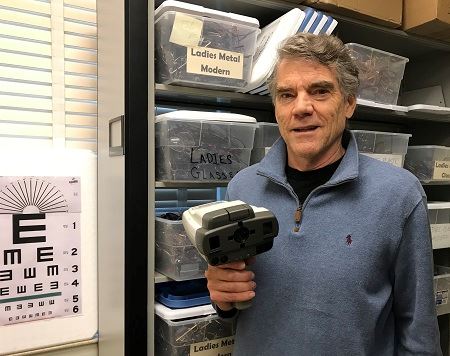 Close encounters
Retired airline pilot Terry Snider is the organization’s part-time Executive Director.  In his half dozen trips abroad for Mission Vision, he has experienced several close encounters with death, his faith strengthened each time his life was spared.  But it’s hazardous work, and while volunteers do their best to extend the hand of friendship, they also know when it’s time to withdraw.

Still, the work can be tremendously gratifying.  Snider tells the story of a man who came to a Mission Vision clinic with terrible eyesight.  “We gave him a pair of glasses, and then he came back the next day.  He said ‘here they are; I’m turning them back in.’  When we asked why, he said ‘Well, I’ve seen the world and it’s beautiful, so I want somebody else to be able to see it.’  We told him to keep the glasses; we’ve got other pairs.  But they’re very appreciative; people are really touched.”

A few years after his organization began its missions overseas – largely inspired by a medical school classmate from Ghana – Dr. Christie was approached by someone asking whether Mission Vision could do the same for students in low-income American communities, as well as for prisoners and residents of transient shelters.  As it turns out, it could, and it did, although the long list of clearances required to provide services in schools here is an impediment not found in third-world countries.  While most of the glasses presented to patients overseas have been used and then given away by their original owners, the readers and sunglasses Mission Vision distributes in the United States are new because, according to Snider, people in America won’t accept used readers.  As a result, some of the glasses the organization distributes are new, although at 70¢ apiece, they seem like quite a bargain.  Still, when you multiply 70¢ by the many thousands given away, it adds up quickly.  So raising funds is a constant need.  In response, an informal network of other organizations – including churches, charities, individual volunteers and several companies in the optical business – has gradually formed, allowing the work of Mission Vision to continue, helping tens of thousands around the world to receive the precious gift of sight.