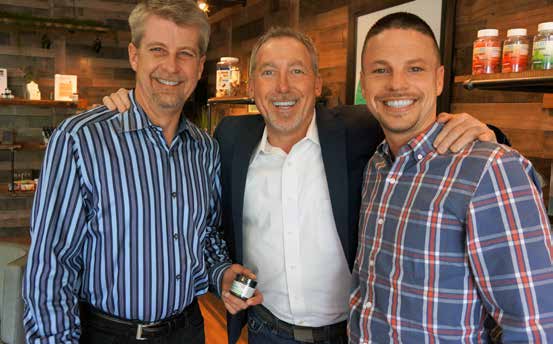 Cranberry’s new CBD store gets down into the weeds

A trio of entrepreneurs in Cranberry may be at the leading edge of a major revolution in non-narcotic, non-addictive pain relief.  But navigating the path to get there has been tricky.

Back in the 1930s, the story goes, America’s timber companies felt threatened by the use of hemp – a fast-growing plant with multiple industrial uses including as pulp for paper production.  So the companies banded together and lobbied Congress, conflating hemp with its psychoactive cousin marijuana, and using it as a pretext for outlawing the growth and use of either plant for any purpose.  Their effort was successful.  The 1936 propaganda film “Reefer Madness” dramatized the terrible fate that supposedly awaited marijuana users.

It wasn’t until December of last year that Congress, in an omnibus farm bill, finally legalized the production of hemp, at least under federal law.  But beyond its many industrial uses such as paper and rope, natural hemp includes a variety of organic compounds, some of which are believed to be effective alternative medicines, benefiting people experiencing a variety of ailments.  But proof of those claims was largely anecdotal; laws restricting use of the plant kept American universities and pharmaceutical companies from performing serious clinical evaluations of its properties.

At the same time, however, university researchers in Jerusalem, operating under a different legal code, began conducting controlled studies looking into hemp’s 113 naturally occurring compounds.  They discovered that essentially all mammals, including humans, have receptors for at least one of those compounds, CBD – shorthand for Cannabidiol – which accounts for up to 40% of the plant’s extract.  And their clinical studies found that CBD does, in fact, provide relief for those suffering from pain, anxiety, nausea, and stress, as well as other conditions.

Meanwhile, back in the U.S., state and local laws concerning the sale and use of CBD – and even, by prescription, of medications containing the psychoactive compound THC – were starting to become more relaxed.  But the legal environment, which is still in flux, has been uneven, varying from state to state and even county to county, resulting in confusion for those supplying the material as well as for those using it.  But the benefits of CBD have been so remarkable that entrepreneurs, investors, and even mainstream consumer products companies, including brewers and soft drink makers, have been moving quickly into what promises to be a huge and lucrative market.

In Cranberry, that initiative has been a friends-and-family project of three local men.  By day, Ed Bailey – a Marine with two tours of duty in Iraq under his belt and a series of health issues to show for it – sells drugs for a major pharmaceutical company.  Following his military discharge, he read as many reports as he could find about CBD and then used the product to treat his own conditions.  He became a believer, and that experience led him, together with brother-in-law Shaun Painter and best friend Wayne Bell, to open The CBD Store in LaSalle Plaza on Rt. 19 this past March.

For Painter, it was actually his second CBD store; his first is in Gibsonia.  But both are actually part of an unofficial network that currently includes 17 stores in the Greater Pittsburgh area selling SunMed CBD products and, if Bailey’s vision comes to pass, eventually as the foundation for a national or even global enterprise modeled after Starbucks.

Until then, the company’s major task is educational – helping people who stop by their store to understand that CBD is not THC, that it’s not addictive, that there are no adverse drug-to-drug interactions, and even that, with the right dosage, its pain relieving properties can offer a viable alternative to the dangerous narcotics whose use is currently causing such serious problems nationwide.

Anyone 18 or older is free to buy the store’s CBD products; no prescription is needed.