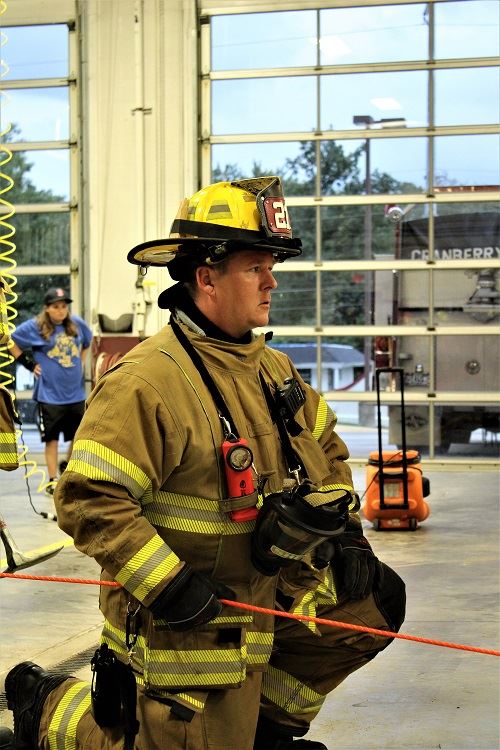 It’s been an eventful 2020 for Spencer Shea.

As Senior Vice President of Risk Management & Deposit Operations for PNC Bank, he’s in charge of crisis management for events like civil unrest, epidemics and weather events that have a large impact.

There’s been no shortage of crisis in 2020, which also saw Shea turn 40. With that came an urge to do something new and exciting. Re-enlisting in the United States Army was the first thing that popped into his mind – until his wife kindly suggested looking a little closer to their Cranberry Township home.

That led Shea to join the Cranberry Township Volunteer Fire Company in November 2019. His life has been nothing but fires – real and metaphorical – ever since.

“I tell people I put out a lot of fires for the bank too, so it was an easy transition,” he joked. “Every single incident that 2020 has put forth, I’ve been on the front lines.”

Originally from Long Island, New York, Shea and his family – wife, Peggy, and children Catherine and Lazaro – moved to the Pittsburgh area in 2009 when he took his job with PNC. After a few years living in Mt. Lebanon, the family moved to Cranberry.

Though he had no previous experience working for a fire department, Shea said he always appreciated and had admiration for what firefighters do each day. He also sought the camaraderie and fellowship he previously enjoyed while in the Army.

He found that and more at the Fire Company, learning the job from the ground up and making friends along the way.

“I was really nervous at first, but I got to know everybody very quickly,” he said. “The relationships I’ve formed here, I hope to keep them for the rest of my life.”

Shea spends two nights a week overnight at the department, responding to calls and forming those friendships. That includes group dinners on station and sessions in the gym. He’s also taken on the role of health and wellness committee chair, helping to upgrade equipment and find programs to promote physical fitness.

“This organization gives you a lot of opportunity and things to run with if you’re really passionate about it,” he said.

The relationships have also helped Shea in his day job, as he said his fire colleagues bring a wide array of backgrounds and expertise to the table. “

“You learn different ways to think on your feet, different tactics and different strategies that you learn from the other men and women here,” he said.

The experience also given Shea perspective as he eclipses the Big 4-0, including empathy and the ability to be humble.

“Often when we are involved in something, it is for all intents and purposes the worst day of somebody’s life,” he said. “To be there and provide a sense of calm, comfort and reassurance for a family has been really inspiring.”

Having scratched that itch to give back and be part of something bigger, Shea isn’t shy on committing to the fire company for 40 more years and beyond.

“If they’ll have me, I’d like to stay here forever,” he said.