For the Cranberry Township Volunteer Fire Company, Jim Cole is about as reliable as a 1928 Pirsch fire engine.

That’s a compliment, by the way.

For more than 45 years, Cole has been the sparkplug for the department, doing everything from serving as chief in the late 1970s, as treasurer for more than 20 years and continuing to volunteer his time as a safety officer and company chaplain after his time as an active responder came to an end. His wife, Janice, was involved in the auxiliary, and his late son, Michael, was a lifetime member.

But perhaps his most notable contribution is his care and passion for the Pirsch engine, which the department purchased used in 1959 – more than 30 years after it went on its first call.

“I’m kind of partial to that truck,” Cole said with a laugh. 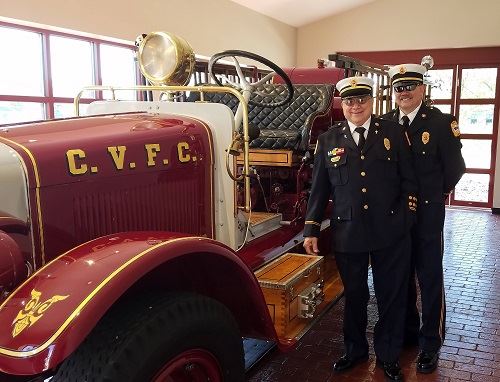 Cole joined the department after moving from Wexford to Cranberry in 1975. It was a different community then, averaging 120 fire calls each year. Most of those were grass fires or vehicle accidents. Once or twice a year there was a structure fire.

That made for a lot of downtime for the crew. Cole, who spent 20 years as a truck mechanic, used that time doing repairing company’s fleet.

In 1980, he and his cohorts turned their attention to the Pirsch, which had been sitting unusable since the engine gave out in the 1960s. They tore it down and began building it back piece by piece. By 1981, it was back in use – a feat that still leave Cole in awe.

“Restoration professionals said it was an impossible task, but we did a ground-up restoration in one year,” he said.

By 1993, the Pirsch had been taken out of the active fleet, but there was too much history behind the wheel to simply let it rust. Cole became the de facto custodian for the truck.

“I try to keep it running the best I can,” he said, adding with a laugh, “These new kids – they’d rather ride around in a shiny, air-conditioned truck.”

Cole sees the value of the truck not only as a recruiting tool but as a reminder of the company’s history. He said he was thrilled to see the company find that same value by building a showcase room during recent renovations to the station.

He’s quick to point out that he was one of many who helped restore the truck and wasn’t the leader on that project. That doesn’t change his passion.

“It is a passion of love,” he said. “I think it’s a symbol of honor for the fire department as far as our lineage of where we came from.”

Cole intends to keep up his involvement in whatever way he can.

“I still have something to give even if it’s not physical – I still have the knowledge,” he said.

And he has the memories and the history to share for new generations – as he put it, “you can’t move forward without knowing where you came from.”

Much like that antique fire engine, Cole and the fire company will keep moving forward no matter the challenges.