In the unassuming warehouse where sheet metal was once forged, Matt Diesel is helping young athletes iron out the rough edges of their game, test their mettle, and shape their futures.

But it’s inside the walls of Diesel Sports Complex on Marshall Road where Diesel hopes to remind players and parents alike that love of the game is the most important reason to pick up a bat or glove.

It’s that love that gave Diesel the idea to start the training facility in 2009. He had just graduated from Duquesne University, where he also played baseball. Reflecting on his own experiences, he wanted to offer a positive atmosphere where players were supported and encouraged.

“I felt unprepared for college baseball,” he said, adding that he also took up coaching during his time at Duquesne. That venture led him to understand the importance of coaching and relationships in developing quality players.

He spent three years operating Diesel Sports in Mars before spending eight years in Warrendale. In October 2020, he found himself inside the aforementioned sheet metal contractor building.

“I remember standing in there for the first time like ‘I’ve got a vision, but there’s a lot to do,’” he recalled.

That included new lighting and an entirely new HVAC system, as well as an overall revamp of the space, which had been left dormant for several years.

Opening in late 2021, Diesel Sports Complex is now a meticulously crafted space for athletic training, with field turf covering the floor and movable netting ascending from the ceiling. It’s equipped with technology to provide real-time feedback, as well as state-of-the-art workout equipment.

Currently, Diesel and his staff of eight focus on baseball and softball training, hitting every aspect of the game – including the mental side.

“This isn’t just for one kid looking to get to the next level,” he said of his program. “This is about long-term development, and we want every kid to love the game and have a good experience.”

Though the current focus is on teams with players aged 8 to 18, Diesel hopes to expand to offer training for additional sports. He’ll be aided by an outdoor turf facility which should be installed before summer.

In addition to team programs, Diesel Sports Complex also offers individual and group training. Get in gear and visit dieselsportscomplex.com for more information. 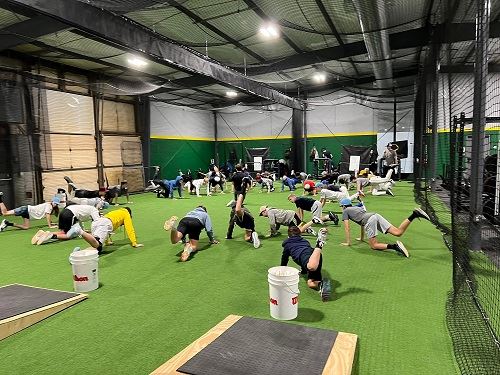